We began our exploration of Piemonte with a day trip to the charming city of Asti, a short, 15-minute train ride from Montegrosso d’Asti. Stepping off the train in Asti, you immediately notice the feel of the city is somewhat different from those to the south. While Asti still feels “Italian”, you notice much more French influence in the architecture.

We spent most of the day just walking the streets. Asti is a beautiful, small city, just the right size to be eminently walkable. When we got off the train, we found two separate, open-air markets featuring local artisans in nearby piazzas. While walking we encountered a wonderful gentleman, 82-year-old Melio on the street who told us stories. Melio was full of life and spirit and well-versed in current American events.

Eventually, we made our way to two of Asti’s ancient cathedrals. First, we visited the Collegiate Church of San Secondo. The original building was probably started in the 10th century and modified somewhat over the centuries. The facade was originally constructed between 1440 and 1462,

Then it was on to The Cathedral of Our Lady of the Assumption, a massive cathedral built around the first half of the 14th Century on the ruins of a previous church. While my knowledge of architecture is almost nonexistent, they say this cathedral is the best example of the Piedmont Gothic style. What I do know is that every church or cathedral we stepped into was stunning in its own way. Each has its own beauty, and while some may be a little ostentatious, and I may wonder about the amount of money that went into building and decorating these facilities, there is no denying that they are sacred places.

On our walk back, we stopped off for lunch at La Buta Enoteca in the heart of Asti. La Buta offers a huge selection of wines from the region. Antonio helped us find a couple of wines that were just what we were looking for. Debbie had a Gavi, made from the Cortese grape. It’s a crisp, medium bodied, dry white wine with a floral nose and citrus on the palate, perhaps similar to pinot grigio, but with more body. I chose a grignolino, a brilliant, light-red wine. From its appearance, you might expect it to be thin, light and watery, but this variety has some tanning that provides more substance. Strawberries are evident in the nose, while the taste starts with strawberry/cherry flavors and then lingers with some peppery notes. Antonio told us that grignolino was once known as the wine of kings, as it was favored by the French royalty. Both grapes are indigenous to Piemonte and are grown in the southern portion of the region. Both wines were perfect with the plate of focaccia, salumi and nuts that we shared.

Before heading back to Montegrosso d’Asti, we stopped in Giordanino’s Pasticceria. Throughout Italy, we came across outstanding bakeries everywhere we went, and Asti was no exception. The care and pride that go into their creations is evident and impressive. Giordanino’s makes a polentina, a sponge cake made with almond flour and soaked in maraschino liquor, that is pure heaven. 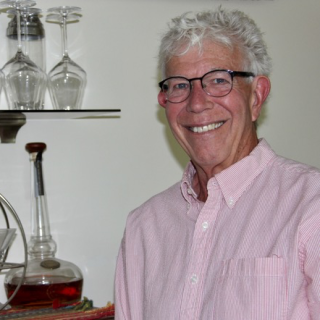